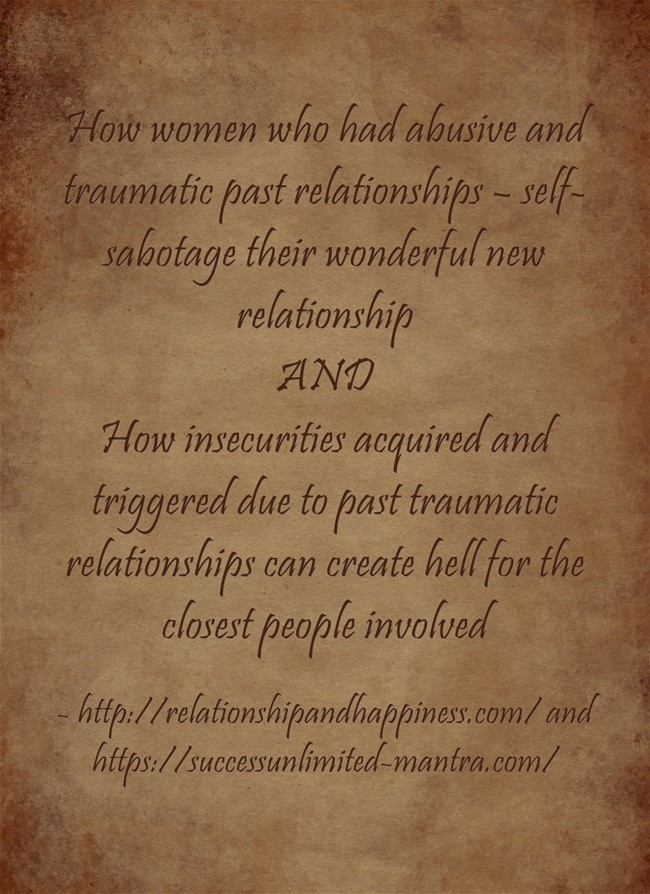 Case Study - One Real-Life Example on How a Wonderful Relationship Which Ended Because of The Disorders Acquired or Triggered Due to Past Abused and Traumatic Relationship.

I am requesting the viewers/readers tell me - Why – this happened – give all the reasons that you think of a golden relationship turning from Bless to Curse – at least for one partner who invested heavily emotionally and otherwise.

Kindly answer questions before reading the possibilities given by me and then only read my part.

This is about a woman – who had an abusive relationship for almost 10+ years but did not walk-out of the same under the assumed-notion of giving the care of both the parents to her son.

Which never happened and she put-up with all kind of abuse – violence, sexual, physical, mental, emotional and financial.

After this became too-traumatic even for her to take it further – she sought and got divorced.

Then she was living alone with her son – still under terror of her ex.

"Quote - in her own words 21 Statements"

But it is a foregone conclusion that – she has managed to sabotage a wonderful possibility of living a joyous life FOR HERSELF.

Meaning she does not have good relationship with her - that is why she could not appreciate the blessings she got and attacked ferociously to destroy that and possibly this man.

You also have to understand that – she may have become incapable of experiencing love, empathy, respect, happiness AS She does not believe that THESE positive things can in her life or that she deserves it.

Impact on the man WILL BE